Today we are back on the bullet train heading for Akita. Funny thing about bullet trains…they don’t turn around but rather go to a destination the go backwards over the same tracks. As a result of this, all the seats rotate 180 degrees so passengers can always be facing forward. But it’s odd to look for your seat and notice the numbers going up sometimes and down sometimes depending on which way you are headed.
We had a nice breakfast in Sendai. My girlfriend went ahead to our room to pack while I took a few photos. I went to the restroom in the lobby and as I sat there communing with nature and enjoying the wonderfully heated toilet seat, I noticed a narrow  door in front of me. Out of curiosity, I opened it. A mop with gloves fell out of it and scared the crap out of me! Curiosity will be the death of me.  As I left the restroom, I realized I couldn’t remember what room we were in, I didn’t have the key, and I most assuredly didn’t speak Japanese. Fortunately the charming young ladies at the front desk were helpful and spoke enough English to get me on my way. 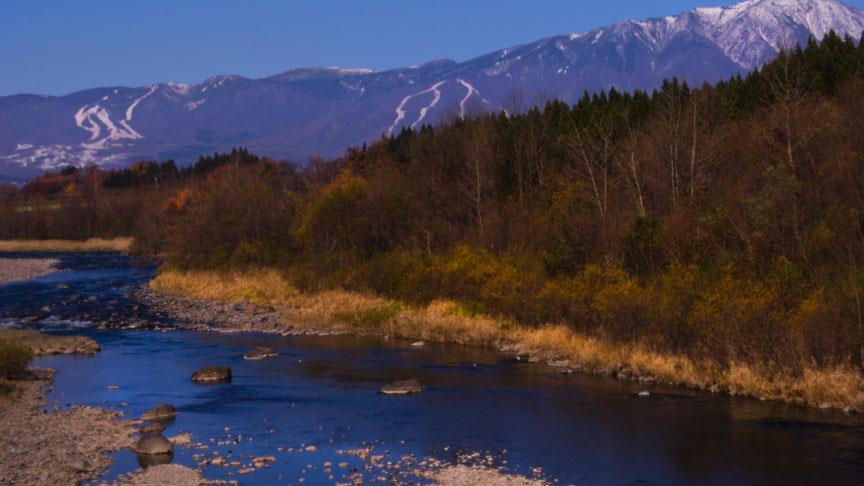 We had purchased a JR (Japan Rail) pass for our trip and it has been wonderfully convenient. So much better than buying tickets every time. It has probably saved us over a thousand dollars in all our travels.
On the way to the airport, our cab driver told us that although he and all his family survived the tsunami, his condo was swept away. I would imagine every person in Sendai has some sort of story about that fateful day.
At the station my girlfriend struck up a conversation with a little old lady who was headed to Akita for a reunion with some of her classmates. She was 86! She was so delightful, cheery, and full of life. She declared,” I will die with my legs and brain working!” So adorable. She gave us 3 heart shaped little felt bags with lavender in them that she had made by hand. Their aroma was yummy.
Out the window of the train we are passing through beautiful autumn colors with snow capped mountains that remind me of my boyhood days in Virginia. The difference is, sticking out of the gently rolling, tree covered mountains, is an occasional steep sided, two times taller, snow covered volcanic peak! Japan is a land of fire and ice, for sure.

Again, it is an odd time displacement, that from the last words I wrote til now has been 18 hou 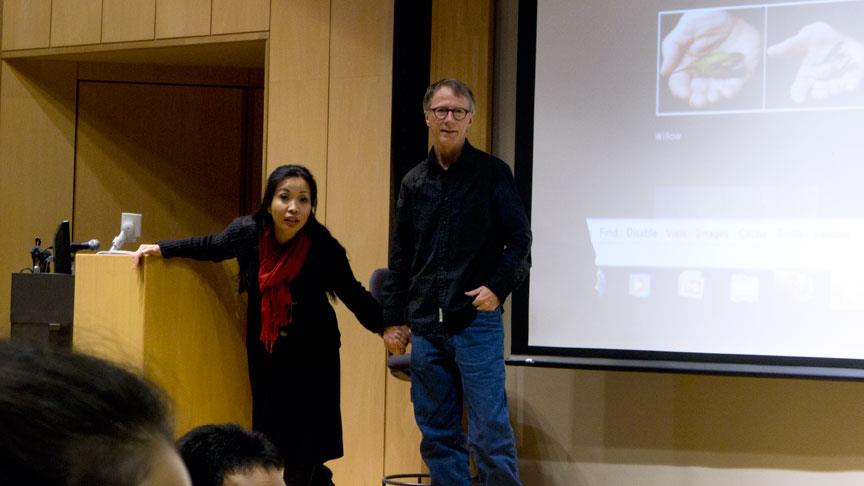 rs. We arrived in Akita and had just enough time to catch a cab, throw our stuff in the hotel, and meet our ride to Akita University where my girlfriend and I are guest speakers. We’re addressing a bunch of students there on the topic ” the conditions of success in Hollywood and effective ways of cross cultural communication, image making, and self advertisement.”
One of my girlfriend’s specialities is corporate training in the area of body language, speech patterns, and intercultural communications. I spoke about corporate image making with, of course, the emphasis on photography and corporate style and marketing imagery. We opened it up after our talks for questions, and had so much fun teasing the students. We got a good laugh by calling their “Drama Club”, the “drunk club”. My girlfriend and I are a good speaking team because we banter a lot. The professor in charge, who was a co-founder of the University, told the student body,”Let’s finish this, so they can continue their argument!” Everyone laughed. It was a lovely evening and charming to see all those young faces with so much of life in front of them. It was so apparent they all had hopes and dreams and I wondered how many of them would realize even a tenth of what they hoped. Most of all, I felt so fortunate to have seen and done all the things I have in my life, including standing where I was at that moment.
Akita International University has, in only 8 years, become the number one foreign language (the students are all required to speak English) school in Japan. An amazing accomplishment.
Professor Katsumata treated us to a wonderful dinner afterwards and again, I got buried in sake. The Japanese can drink and I’m such a lightweight. After ONE day sober, here I was staggering back to my hotel room. My lovely girlfriend can easily put me under the table every time even though she’s a teeny thing. For some reason I don’t get a pounding headache from it though, so that’s good.

Another morning… right now we are on yet another bullet train heading back to Sendai and on to Minamisanriku. While I am looking forward to it, I also have grave feelings of dread. It is a city that was 95 percent destroyed by the tsunami. Fifty percent of the population was washed away. How to shoot it and put a positive spin on that sort of subject matter is clearly impossible but I hope to capture something that speaks of hope. What we are heading for , I am sure will be an immensely moving experience so I will carry a box of kleenex. Strange to be riding the train through beautiful countryside, peaceful farmlands, and lovely homes, knowing I am headed for ground zero of one of Japan’s most horrific natural disasters.

Another time displacement…we spent the night here in Minamisanriku at the gorgeous Kanyo Hotel. It’s unbelievably beautiful. The hotel sits up on a cliff about 150 feet above the ocean. The foundation structures go deep into the rock and all the way to the water. The tsunami tore apart some of the foundation and part of the first floor but the hotel held strong and has been almost completely repaired. It reminds me of Monterey, California. I hope what happened here will never occur there.
We had an amazing dinner. It’s so hard to function normally here knowing what the people in this area have experienced. After we checked in and were headed to our room, we noticed an art show in the lobby. Some wonderful paintings by artist Toshie Hashidate. She was there signing autographs, so we stopped to chat. SEVEN of her family members died in the tsunami. I noticed the head shot on her promo wasn’t very good, so I asked if I could take her photo. She was kind and gracious. I set up some lights and shot her standing next to a row of her paintings. She was gracious and grateful for her new photos. As my girlfriend chatted with her, they discovered they were from the same neighborhood in Chiba, near Tokyo. Small world.
On a side note, it’s so refreshing to be able to shoot most anywhere I want. In Los Angeles, I’d have to get a permit, hire security, and sign all sorts of waivers to shoot in a hotel lobby. Here I didn’t even ask and people were happy to see a photo shoot taking place.
Our room is on the 10th floor facing straight into the Pacific. I can’t begin to imagine the horror they must have seen coming across the water. How do you watch 95 percent of your city wash away knowing many of your friends were taken? This was a resort town but now it is a tragic skeleton. The fishermen who still had boats went right back to work. And oddly, they are building more structures right down near the water’s edge. It seems they HAVE to do this in order to ensure the catch of the day is fresh when they cut it up and prepare it for market and this is Salmon season.
The river that flows through what used to be a town is calm these days except for the fact, it is full of spawning salmon. The salmon have no idea what happened, so they have returned full force with less pressure on their numbers since most of the town has been washed away.It’s odd to see lots and lots of dead Salmon (they swim up the river,spawn, and then die) all over the river banks. It seems strangely metaphorical.. sort of a “cycle of life” kinda thing, I guess. I got very emotional watching the salmon struggle through the shallow parts of the river. I’m sure it is because, just being here, brings everything that is human and compassionate so very close to the surface.

Much of Minamsanriku cannot be rebuilt because the whole area subsided and when the tide comes in, it is now underwater. Some places went down 6 feet or more.