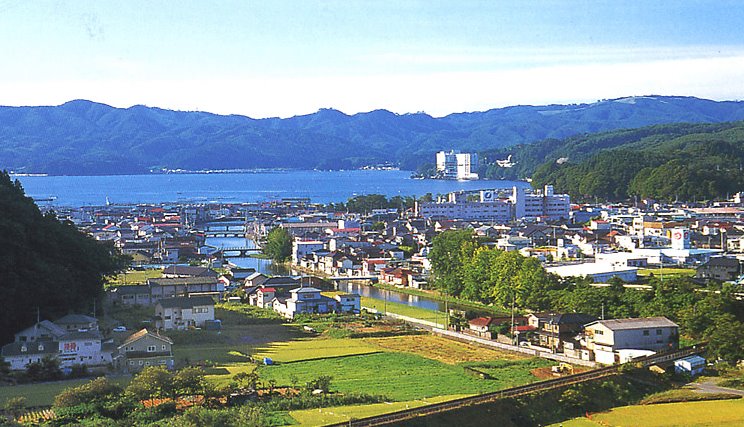 A little more on Minamisanriku before I move on. It is impossible to describe what I saw there. Standing in the middle of such mass destruction is overwhelming to the point you just go numb. More than anything, what I felt was confusion. My mind could not comprehend houses in this place, I couldn’t hear children playing, smell food cooking, or touch the texture of a building… it was all scraped clean down to nothing but concrete slabs.
We had hired a cab driver to take us around. It felt invasive so we asked the cabbie if it was OK. Not only was he OK with me taking photos, he knew all the best spots because he had shuffled many people from the press to various locations. He told us that his Father in law was in the hospital when the earthquake hit, so the nurses took him up to the third floor where they thought they’d be safe. The tsunami took them all.

As we drove into the center of where the town used to be, I just got out and started walking. My gf couldn’t bring herself to even get out of the cab, she was completely heartbroken. This is her home country. I walked through meaningless piles of debris…pipes, shattered wood, chairs, tables, blankets, roof tiles… everything that constitutes a a deconstructed home. They have pushed out roads through the debris and made piles 50 feet high and half a mile long. Pile after pile. A few buildings still stand but are completely gutted and stand soulless like skeletons on a movie set. 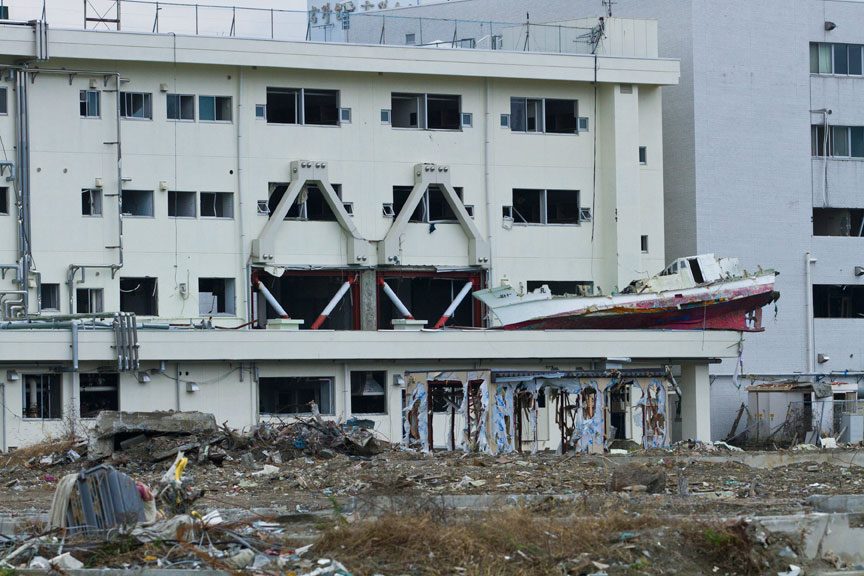 Because the scale of things was so massive, I was a bit uncomfortable for not having a stronger emotional reaction, until I saw a little girl’s shoe. I lost it. I could hear her laughter, see her smiling little face, and could not bear to think what her final moments might have been like. I read once about a photo journalist who was covering the starvation in Africa, when asked how he dealt with the horror of what he was seeing, he said,”I am doing all I can to help. Maybe my photos will make a difference, but every now and then I just have to put my camera down and weep!” So it was for me, I shot til I couldn’t see through the lens, then I’d take a small break and just sit and look. I still can’t get it through my head. 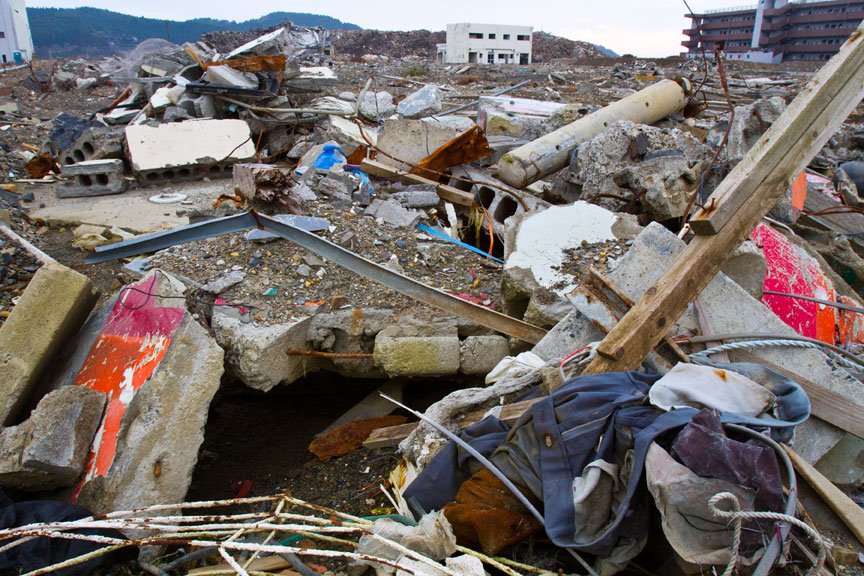 The day of the destruction, our cab driver had dropped off a fare and was headed back into town when he looked up and saw the tsunami coming right at him. He slammed it into reverse and backed up as fast as he dared. He got away and drove over a hill. There were cars everywhere from people evacuating, so he just left his car where it was and started running back to town. He knew of a hiking trail through the woods, so he hiked all night, and when he broke through the forest the next morning, all he had known was gone. He couldn’t find his house, his neighbors, or his loved ones. His family, with only the exception of his Father in law, had escaped but it still took him two days to find them.
Some people had raced to the top of a hill where there was an old folks home miles from the ocean shoreline. They thought they were safe but tsunami took them all.
As I walked around that shell of a building, there were gurneys and wheelchairs twisted into death sculptures. A soccer ball with a kids name written on it sat on a window sill, carried up from the town below. Inside there were big piles of debris. One thing that caught my eye was a paper with hand prints on it. It was the kind a kid makes when they dip their hand in paint and then make a print on a piece of paper, then sign it as a gift to an elder. I had visions of an old lady cherishing the hand print of her grand daughter until the ocean came for her. Time to set the camera down again.

Our driver took us back down closer to the water where a new fishery building has already been erected. It’s a huge structure right in the midst of all this destruction. There was a salmon run going on during the time we were there and that is a large part of what used to be Minamisanriku’s livelihood, so there were the fishermen, back to work, doing what they have done for years and years. I watched as Salmon came en mass up the river to spawn and die. I’ve seen lots of Salmon runs in the Pacific Northwest but this was different because it was here, in this place, in the river than runs through the destruction. Dead Salmon littered the river banks and took on a whole new and deeper metaphorical meaning. Perhaps it is as simple as a “cycle of life” vision but somehow it all goes mad when mankind gets involved.
The town will be rebuilt but this time up on the surrounding hills while only a few boats in the harbor and a few buildings that HAVE to be near it, will venture there again. Some of the fish farms in the bay have been reconstructed and I saw fishermen motoring here and there in what must be numb routine.
As I stood up on a boat that had been torn in half, I shot photos of the fishermen going about their duties. I failed to look where I was going and stepped off the boat onto a nail, and drove it through my shoe. The nail stabbed through the rubber of my tennis shoe and luckily went right between my toes without even a scratch. I climbed the rest of the way down, looked at it, stepped on the back side of the board the nail was in and pried my foot loose. I shrugged,”Whatever”… and kept shooting. I honestly believe had it driven through the dead center of my foot I might have had the same reaction. It was a perspective check. After all, what is a stupid little nail wound in a place like this?

A young man we met is in charge of the first festival in Minamisanriku since the tsunami. We met with him and his business partner in the Hotel Kanyo where we stayed. As we sat in this luxurious place, amusingly named “Blue Line Tea Rounge” (yep they spelled it with an “r”), we asked uncomfortably if there was any way we could help. “Just let people know”, he said. The Japanese are unaccustomed to asking for help but give it graciously and abundantly when a need arises.
There is a custom on New Years in Japan where children are given decorated envelopes of money from relatives and friends. It’s called  “Otoshidama”. A while before we left for Japan, my gf came up with the idea to give as many envelopes as we could to the children of Minamisanriku. Her idea was to put a $5 American bill in each envelope with a paper listing all those who donated. While it isn’t a great deal of money for each child, it is the idea that someone in America is thinking about them and that those people do care, that means more. The 5  buck bill is worth more in metaphor than in reality… especially given the exchange rate. I suspect the children in Minamisanriku will keep those bills for many years.
My gf handed them over $3000. in Otoshidama envelopes. The young man and his business partner got teary eyed and literally sat and stared at us not knowing what to say or how to say it. 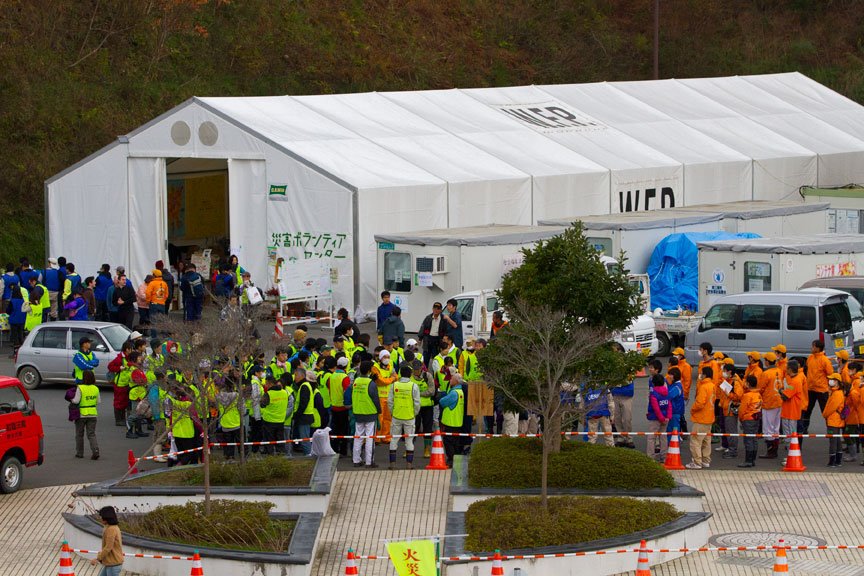 Money had come in to the area through the Red Cross and other agencies but very very little of it had been distributed even all these months later. But here in this room there was a direct gift from a few in the US to them, with no strings, no red tape, and 100% going to the children. I was happy to be part of it.

We slept that night uncomfortably comfortable with images in our heads of hope amidst devastation, peace in the middle of chaos, and people resuming their lives surrounded by shattered pieces of what it used to be.

Tomorrow we are off to Fukushima. The dead nuclear power plant is on the other side of the mountain from where we will be.
It has started to rain.