Although I am back in LA and thoroughly jet lagged, I will continue posting my trip journals. Photos will be forthcoming, too. 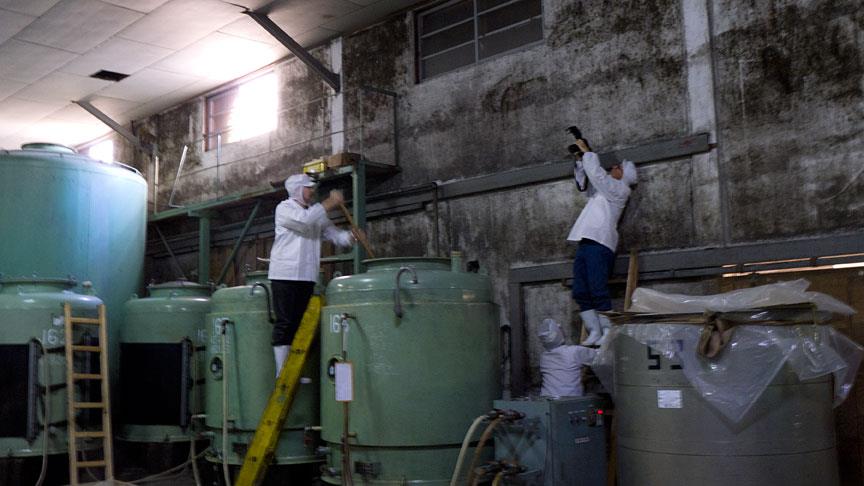 Out of bed by 6:30AM and off to tour the Muromachi Sake brewery. It was fascinating. They have been brewing sake in this traditional way for over 300 years. The current owner is the 11th generation but there is a joke that some of their ancestors lived a couple hundred years. The brewery burned at one point and some of the family records were lost, so the family tree has a few sketchy spots that are filled with Japanese humor. We had White Peach Sake, Tomato Sake, Ginger Sake, Plum Sake, Yuzu, Junmai Ginjo, Red Pepper, and a few more that are now a fuzzy blur in my cloudy memory. We got to carry the steaming hot rice in these kind of burlap folder blankets. We 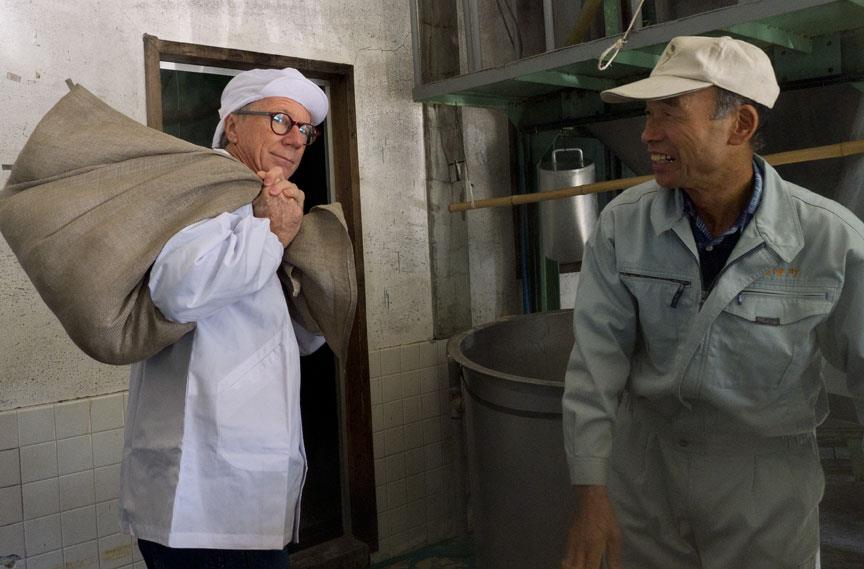 carried it to a room where it was spread out to cool. The rice is an Omachi rice, which is called phantom rice because it is hard to grow and particular. They “polish” the rice (a sort of grinding process) until there is only 40 percent of it left. That “heart” of the rice is the best part and basically makes Muromachi Sake expensive and REALLY REALLY good! We wobbled out of there and missed our train, so we took the next one to Kyoto.
A bento box on the train helped soak up some sake, so we were approaching sober when we arrived in Kyoto. We had only two hours to tour a couple of temples near the train station because we had to be in Nagoya for another meeting and I had a talk to give. The temples in Kyoto were worth the entire trip to Japan. I was literally moved to tears to see these beautiful structures. Huge buildings built without one nail. So much tradition, so much history, and so much respect for both is obvious everywhere. If you Google the 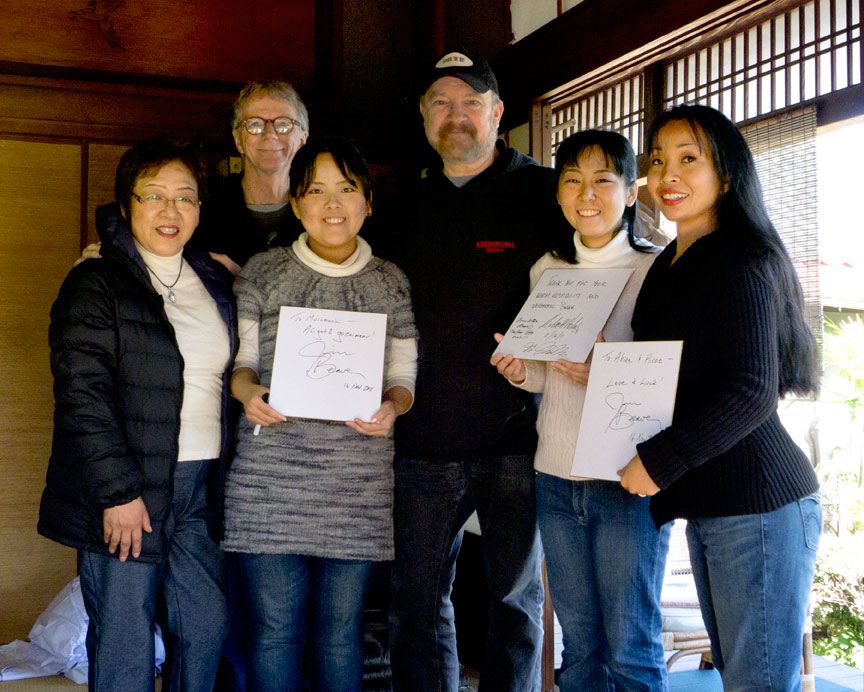 temples of Kyoto, you will see what I mean. Simply astonishing. It is my understanding there was a petition sent to our president during World War II, to please NOT bomb Kyoto because of it’s beauty and history.  I am so glad this city was spared, it is full of treasures and beauty. So many cities in Japan were destroyed by US carpet bombing during the war. In my travels around the world, I see over and over again the tragedies of war and the older I get, the more of a pacifist I become. “War, good god ya’ll…what is it good for? Absolutely nothin”.

As we walked back to the train station, I noticed little piles of white stuff by doorways. My girlfriend told me they were piles of salt placed there to ward off evil. Wonder if it works?
We got back to the station just in time to hop the train for Nagoya. I gave a talk there at

some sort of “Beauty School” . I babbled on about shooting fashion, head shots, marketing and self promotion, then answer questions. It was kind of fun but I was exhausted. We had another bento box on the train. I ate rice, mushrooms, salmon eggs, seaweed, daikon radish and chrysanthemum salad with a yuzu dressing, a bit of egg plant, and some cooked salmon. It was delicious and fresh. The combination of salmon egg and cooked salmon is, amusingly, called “Mother and daughter”.
My girlfriend is fairly nuts. As I’m typing, she turned to me and said,”Give me a mole!”. I adore how random and weird she is. Me,”Uh….OK”. SO I took out my ink pen and drew a mole o 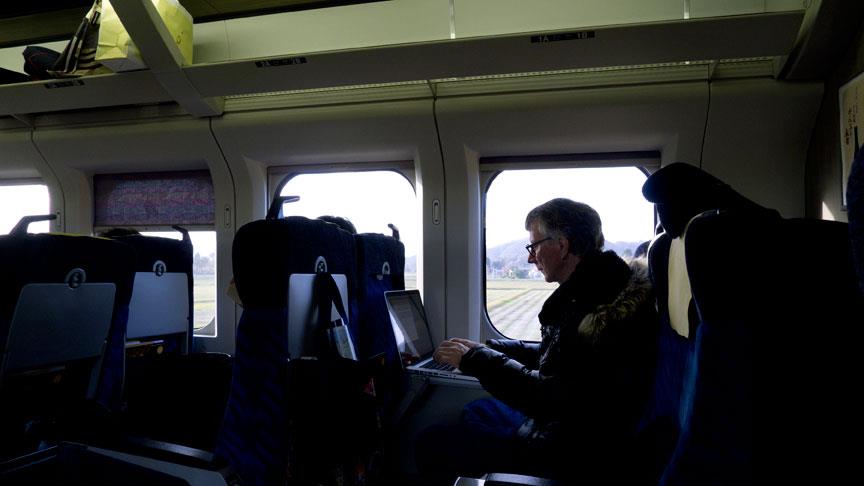 n her face. She was happy. It’s the little things, ya know.
One of the curious things they have here is “smoking rooms” at the train stations. It’s a glass room about 15′ x 50′ where people go to smoke. It’s weird to see all these people crammed into a smoke filled goldfish bowl. Smoking is still very prominent here, so we are careful to look before we eat or reserve a train car, to make sure it is non-smoking.
There was a photo shoot going on at the school, so I checked it out. One of the teachers was shooting some fashion stills. Much to my horror, the guy who runs the school asked me what I thought. I hate that question. In LA, that means,”try to guess what I think and then agree with me”. I am a lousy politician and am a lousy liar, so that particular question has gotten me into trouble on more than one occasion.
I said,”Well..it’s like cream in your coffee, not really right or wrong, just different!”
I THOUGHT I had dodged a bullet but he cut to the chase and said,”Ah… well what would YOU do differently!”
Crap… busted.
“Well, for me, the key light is too low, the fill is too hot, he’s using the wrong lens and camera combo, he should be shooting raw files instead of jpgs, and there are some serious styling issues…the kimono is not being worn correctly !” I winced.
“Ah”, he said. And that was it.
I asked my girlfriend later if I had committed a social faux pas and she said, No…because unlike the US, they really want to know what you think because they respect you. If they didn’t respect you, they wouldn’t bother asking. I hope it helped. 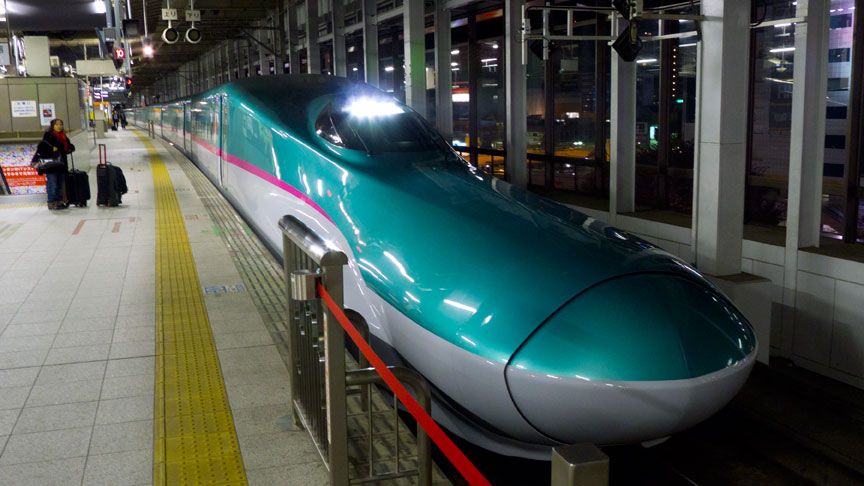 Four cities in one day is exhausting. Okayama to Kyoto, to Nagoya, to Sendai. We stopped briefly in Tokyo to change trains. I am looking forward to a good night’s sleep in Sendai, ground zero of the earthquake. Tonight it will be just my girlfriend and I, so there won’t be anyone filling up my sake glass over and over. What a relief.
Tomorrow we are off to Akita.