Just to update those of you who haven’t heard.
I switched insurance companies last Fall and decided to go get a base line checkup to make sure everything was OK. Turns out it wasn’t. They discovered my heart had a Mitral Valve Prolapse with severe regurgitation, and Atrial Fibrillation.

I went in for open heart surgery on Tuesday the 16th of January.
Hospital is a special kind of torture. I, of course, didn’t sleep the night before surgery, then although I did sleep DURING surgery I think my body knew there was some bad stuff happening. After waking up, the worst part was being unable to breathe deeply and in pain AND no sleep. Of course the usual, nurses coming in every 15 minutes or so to wake me if I happened to fall asleep to draw blood, check BP and heart rate, give me meds, check dressings, etc etc. AND there was a lunatic on the floor yelling,“NURSE….you’re trying to kill me!”
Nurse,”No…we’re trying to help you!”
Lunatic,”LIAR!!!!!”
This banter went on for hours.

My two days in ICU were the worst. Then I got transferred to another room and out of ICU to a private room, so I was pretty happy and hoping for some sleep but that didn’t happen. The fire alarm went off!!! I heard a nurse yelling, “You can’t smoke in there!!!”.
For some reason they weren’t clear on how to turn it off…so the alarm went on for at least 45 minutes. Finally they reset it and just as I thought I MIGHT get some sleep, a technician came in and took an X-ray and decided they might have to put in a chest tube because I had an air pocket under my right lung.
That was the last straw…. After they left, I just broke down from lack of sleep, pain, and inability to breathe deeply. I sobbed but Kaz is a rock. SO the good news is, she is unwavering in her support and strength….bad news is, if you need a bit of coddling….not gonna happen. She held me in her arms long enough to say,”You’ll be fine. I’m going back to the hotel to get some sleep.” Oddly, I am constantly amazed at her ability to know what I need more than I do.
Poor Kaz was amazing during all of this and hardly got any sleep either and ironically, the fire alarm went off at her hotel at 4AM that morning. What is it with us and fire alarms!?? Her biggest complaint was that there were all these hot young firemen running around and she hadn’t had time to put on her makeup.

I managed to get a tiny amount of sleep Thursday night, then the good news came. They decided against the chest tube because the air pocket had shrunk and they thought it would be reabsorbed.
So I got discharged on Friday evening just 4 days from entering the hospital. It’s hard to imagine that the technology is now available for open heart surgery to be so minimally invasive.

They repaired my mitral valve by reconstructing it, then sewed in a kevlar ring to make the valve slightly smaller, then added four gortex chords because the tendons to my mitral valve had broken off (which is, in part why they were floppy), they also did what’s called a “cryo maze” procedure where they literally burn (with a tool full of liquid nitrogen) a maze into your heart to create scar tissue so that your electrical signals will only go one way. It is a way to fix the atrial fibrillation. Then they trimmed off a “left atrial appendage” because it is apparently a part of the heart that can be problematic with A Fib. Last but not least, they did a cardiopulmonary bypass. I’m still not sure why they did that and there was no discussion of it beforehand other than to give Dr. Bethencourt (the surgeon) permission to do whatever he needed when he got in there. If you’d like to see the Mitral Valve repair procedure, it’s on Youtube here: https://www.youtube.com/watch?v=LhhWu4JCrBw It’s animated – so no worries about it being too gory.

I’m fascinated by this stuff, so I was really glad I did my research and DIDN’T believe the first Doc I consulted with. He told me that the DaVinci machine (which is the robotic device Dr.Bethencourt used to perform my surgery) – look it up on line – so cool!) was good but “Not quite there, yet!”. What he should have said was that HE was not there yet or that his hospital couldn’t afford one, or whatever. I wanted to punch him. It was like going to a photographer today and saying,”How about digital!?” And the photographer saying,”Well…it’s good but just not there yet!”
I wonder how many people go through lengthy unnecessary pain because of his “advice”. Granted – there are some conditions that cannot be treated in a minimally invasive way….but if you ever have heart issues – be sure to do your research.

So I’m home. It’s only been two weeks and I walked about a mile today. I haven’t taken any pain meds since I was discharged, but I’m still sore and I try to pull my legs up against my chest to cough or sneeze to avoid the “hot knife to the groin” pain. That’s from the two 3” incisions that were made to put me on the heart/lung machine. Other than those two incisions, I have 5 incisions in the right side of my chest. I’m telling everyone I was in a knife fight!

I have a one week, two week, and one month, then a 3 month follow up visit. After 3 months I should be back to almost normal….or in my case better than my old normal! I have 30% more blood flow and NONE of it going backwards!

So – glad to be home with my little family. To see my little boys face…perfect.
I’ll be back to work next week! AMAZING!! 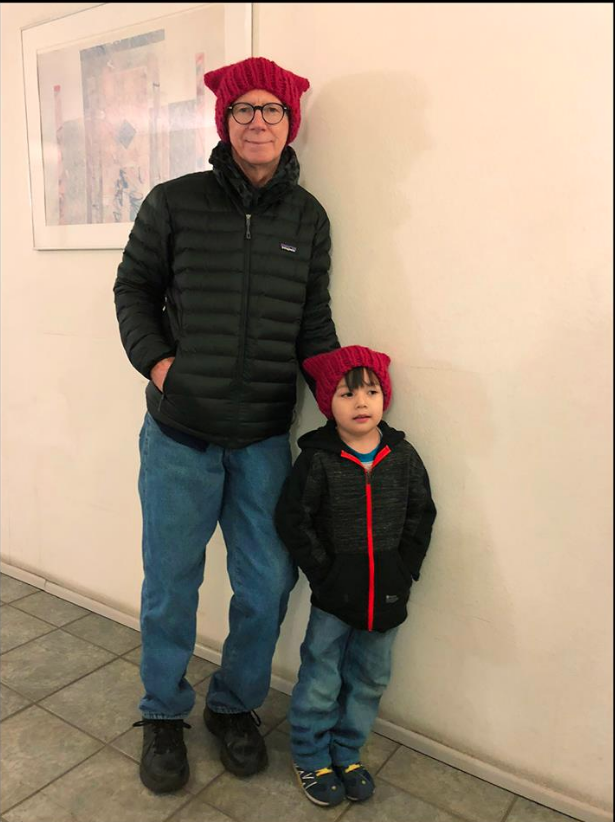 Squi and I have been walking a mile a day