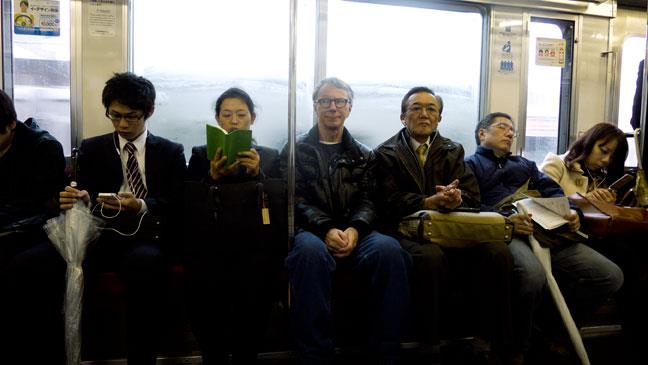 Yesterday was eventful. I spent pretty much all day at a local studio. My gf, who does a lot of management, PR, scheduling, office duties, and a host of other things for my business, worked out a deal with the 3 owners of an art studio not too far from where we are staying at the Shinjuku Hilton.

We arrived at the studio, and the first thing the head dude said to me was he knew me from DA and was a fan. That seemed to me a good way to start but the next words out of his mouth were asking if I’d shoot some nudes of HIM! OK….awkward moment. I assumed the other two guys knew my work also (figured he told them) so I said,”Sure…no problem”.
I spent the entire day shooting the 3 guys and doing wacky images of them and of course, a nude of the leader of the pack. Part of the deal is, I had to shoot photos of their studio for the web. They moved into this new space just two weeks ago and were pretty excited to get the ball rolling on renting and doing their art thing. I was impressed at some of the paintings and sculpture around. There was a five foot long and 4 foot tall walking fish that was equally amusing and creepy.
Another deal that my lovely gf worked out was for me to shoot a few photos in exchange for my tour guide services and translator. So after spending the entire day shooting, I was ready to take a break.
BUT… a dinner was held here at the Hilton in honor of my friend Jim Beaver who is here with us. I mentioned in my last journal, he is one of the lead actors on “Supernatural”. I have never seen the show, so I had no idea of it’s popularity but I’ve been educated by the people mobbing him. Poor guy. He is ever so gracious to his fans.
Again, my gf did the event planning, so the dinner was wonderful. She had scheduled him time at every table, so not one fan was disappointed. Each fan got to ask him a couple of questions, have a photo op (guess who took those photos?), and be generally in the presence of someone they admired. I DO have to say that I never really understand the whole star struck thing though. Guess I’ve been living in LA and rubbing shoulders with enough celebs that I have a clear idea about them being just ordinary people with extraordinary jobs. Jim however, is an extraordinary guy.
He walked around Tokyo yesterday site seeing by himself. But it seems his iPhone GPS signal was bouncing off the buildings so was horribly inaccurate. He got lost. He was a bit frustrated but decided to sit, have a meal, and figure it out. Thing is, he had bought a rather expensive gift for his daughter and didn’t have enough money to pay for lunch! LOL His Japanese is sparse, so he struggled and struggled to try and tell the poor waitress his issue. He finally returned to his iPhone and a translation app, and was able to tell the story. The waitress was fairly upset because she said the owner would be upset at her. It was a tiny lil hole in the wall place (where the best food is always found), and so they didn’t take credit cards. He wandered around FOREVER (his words) to find an ATM, then went back and paid the balance. The waitress was ASTONISHED 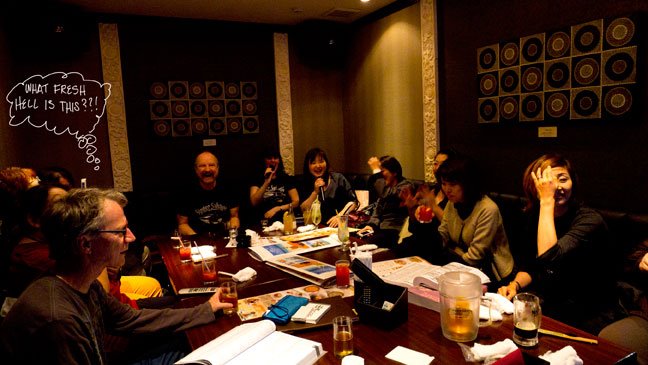 that he returned. I’m not… it’s exactly what I would expect of him, and of course, exactly what I would do.
He got lost on his way back to the hotel, but finally made it in time to shower for dinner.
After dinner, I was surprised to find out one of the fans had GIFTED us all with a “nice” visit to the local KARAOKE bar!!!! Can I just state for the record, how much I detest even the IDEA of karaoke?? OMFG. SO…off we go, and I ordered copious amount of Asahi to survive. Self medication was MY approach to surviving karaoke. I could write 27 entire journals about the evils of karaoke, but the Japanese are freaks for it… well, that and panchinko….but that’s another story. So there we sat, Jim, my gf and I, and a bunch of Japanese fans of Supernatural, in a room with a HUGE video screen, two unfortunate microphones, lots of beer for me, and OMFG… (you really can’t make this stuff up)…TAMBORINES!!! I no longer have any fear of hell because I certainly have been there. 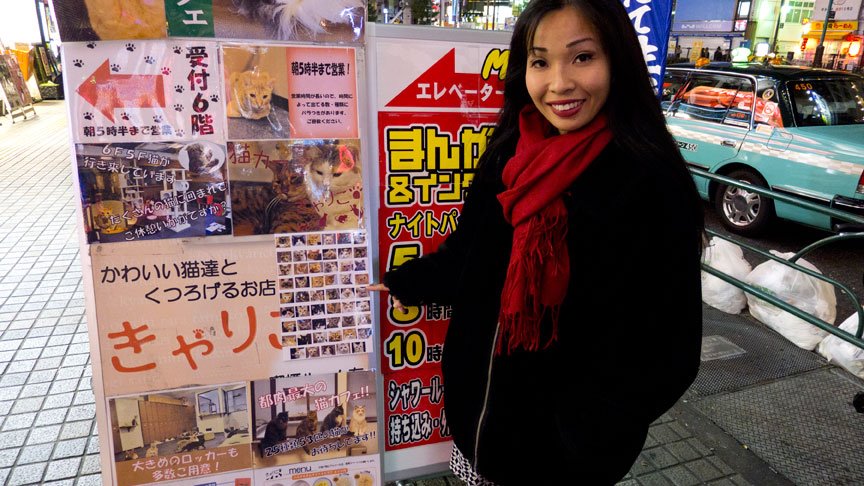 Afterwards, the three of us strolled (well, THEY strolled, I staggered)  back to the hotel, through streets of hookers, temples, BAD American fast food (yes – you CAN get a SPAM burger here at the local Burger King), and shop after shop of souvenirs.
How the tour guide/translator, one of our friends, Jim, my gf, and someone I still don’t know, all ended up back in our room drinking, I have no idea….but I fell asleep…content with another madhouse day in Japan.