A final word on Minamisanriku, then on to Fukushima.

There was one building I really wanted to shoot when we went to Minamisanriku. It was the place where Miki Endo worked. She was a lovely vibrant 24 year old newly wed who worked at the Minamisanriku Disaster Response headquarters. It was her responsibility to announce the warning of an approaching tsunami.

“Tsunami warning, get to higher ground”, she repeated over and over again. In many of the videos from that fateful day, you can hear her voice echoing through the town as water rushed in and swallowed everything in it’s path. She was on the second floor of the building. Thirty people worked there and when the tsunami came they all rushed higher and higher but Miki stayed at her post issuing warnings until the very last second in an effort to save as many lives as possible. Along with others, she hurried to the roof, but the raging tsunami ripped the skin off the building and gutted it, taking everything and everyone inside, and then it rose even higher. Among the people working in that building was the Mayor of Minamisanriku. Nine people made it to the roof pushing their Mayor ahead of them…but still the tsunami rose higher. They climbed a radio antenna and clung to life while just inches beneath their feet all the places knew and people they loved disappeared beneath the roaring torrent.
Nine people will never forget that day, suspended above the furious tsunami, clinging to fragile life while 21 of their friends and coworkers, including Miki Endo, were devoured in the deluge. 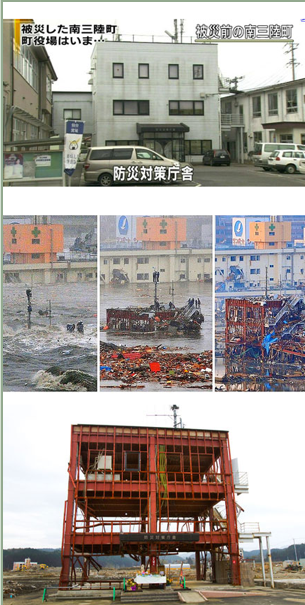 This is a composite photo of the building where Miki and 29 others, worked. The top frame is as it was, the center frames show the Mayor and 8 others hanging on for the lives while the entire building is devoured, then the water begins to recede. The bottom frame, I shot, and you can see MUCH of the debris has been bulldozed away. Initially, people wanted to make the building a memorial to Miki and the tsunami victims, but her parents (who were saved by their daughters warnings), could not bear to pass by it and asked for it to be demolished.

When we left the hotel at Minamisanriku, 3 attendants rushed out with a 10 foot long banner that said “Thank you for coming!” and then they bowed graciously as our bus pulled away. It was raining.
It was a couple of hours bus ride back to Sendai to catch a train to Fukushima. On the bus my gf got a call and turned to me,”Wanna do a shoot in Sendai!?”
Me,”Huh? Uh….OK!”
Sometimes I think she knows every single person in Japan. Someone heard we were there and knew my work. This guy SHU CHIBA represented a Taiko Drum group. This particular group has been traveling a lot doing fund raisers for the earthquake/tsunami victims. They wanted to shoot at this particular shrine in Sendai that is the grave site of Date Masamune who was the founder of Sendai. If you Google him, it’s a fun read.
Hauling all my gear and a packed suitcase, we caught a bus for a half hour bumpy ride, then walked another 6 blocks to the entrance of the shrine. When we arrived at the shrine we rounded a corner and stopped dead in our tracks, staring at 650 million wet and slippery stone steps. 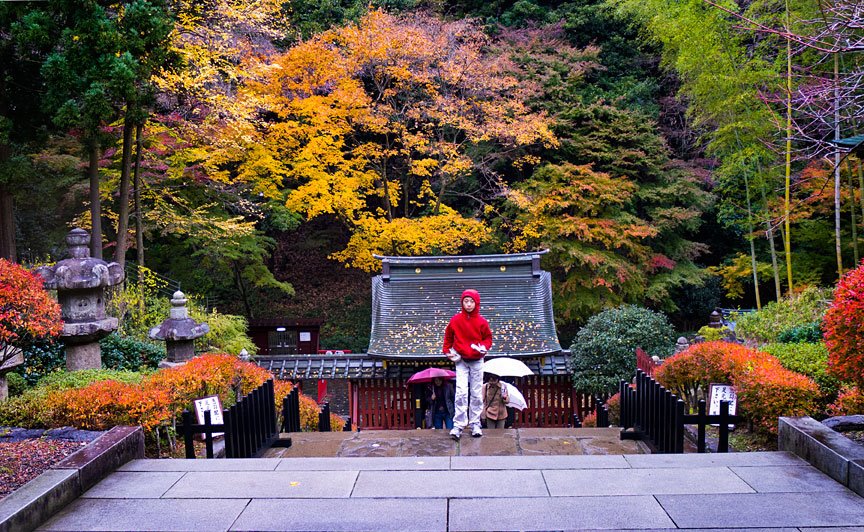 “Awww…. I can’t do this” my gf whined.
“YOU got us into this, so come on…they wanna shoot up there…so let’s go!” I grumbled
When we got to the top we were sweating in the chilly drizzle. There was a kiosk where the band and their rep were hiding out, so we all exchanged greetings and headed out to our shooting location. Much to our horror, we rounded a corner and came face to face with another set of 650 million wet and slippery stone steps.
I glared at my gf but couldn’t be irritated because she looked like a soaked kitty and she was just standing transfixed staring glassy eyed at the steps. 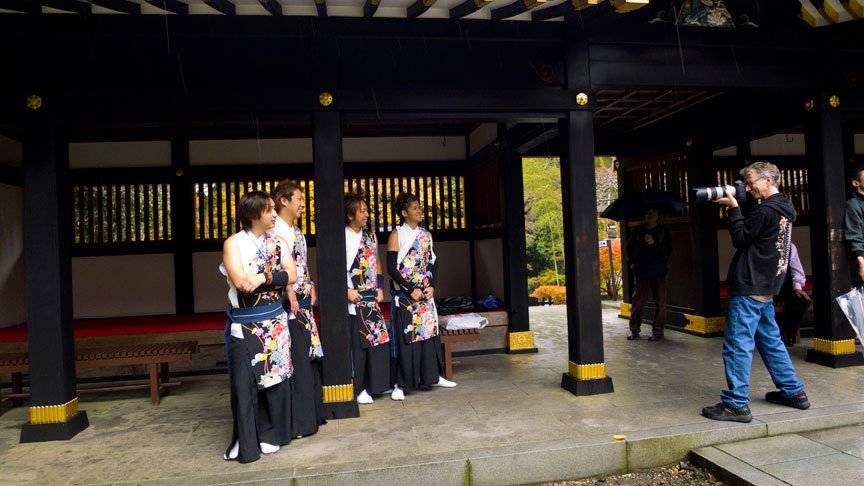 If misery does indeed love company, it didn’t seem to exhibit itself that day. Even the Taiko Band made jokes about their location choice. But fortunately, there was a nice location at the top where we could shoot and they could be out of the rain. Unfortunately, yours truly, had to stand in the drizzle and try to get a good shot in between tourists walking through the backgrounds of my shots. 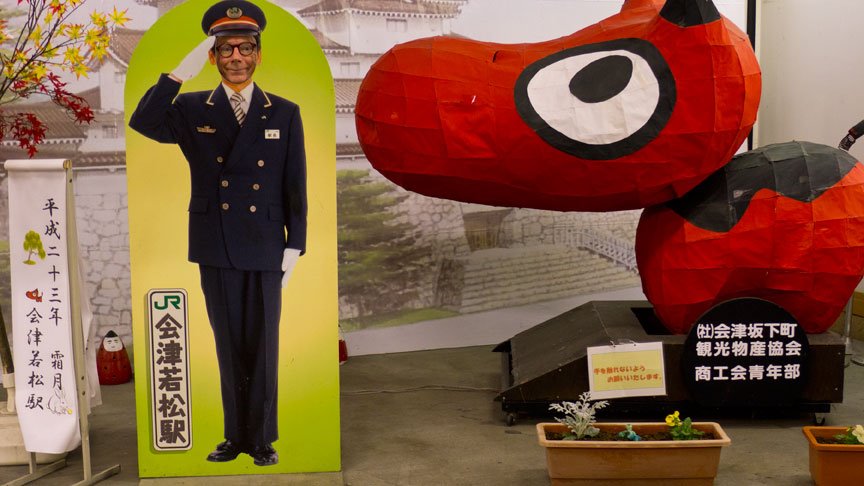 We took a taxi back to the station, caught a train for Fukushima, and watched out the window as the clouds parted in time for a lovely sunset.
Yet another bar in Fukushima. More sake tasting. More staggering back to our room…well, I staggered… my gf can put me under the table SOOOO easily. Whatever.
We are upwind and on the opposite side of the mountain range that separates Kitikata from the nuclear reactors that blew. There is less radiation here than there is in Tokyo but just the NAME ‘Fukushima” stops people in their tracks, so the economy in this area is suffering horribly. It’s so sad because the crops here are fantastic but are virtually unmarketable.
At 6 AM we received a wake up call from Mom Nature… an earthquake. I’m a kind of twisted sort – I LIKE earthquakes. Only one made me nervous and that one was the 6.7 Northridge earthquake of 1994. I lived 10 miles from the epicenter. So the Fukushima quake was kinda fun but a solemn reminder of all we had so recently seen and experienced. 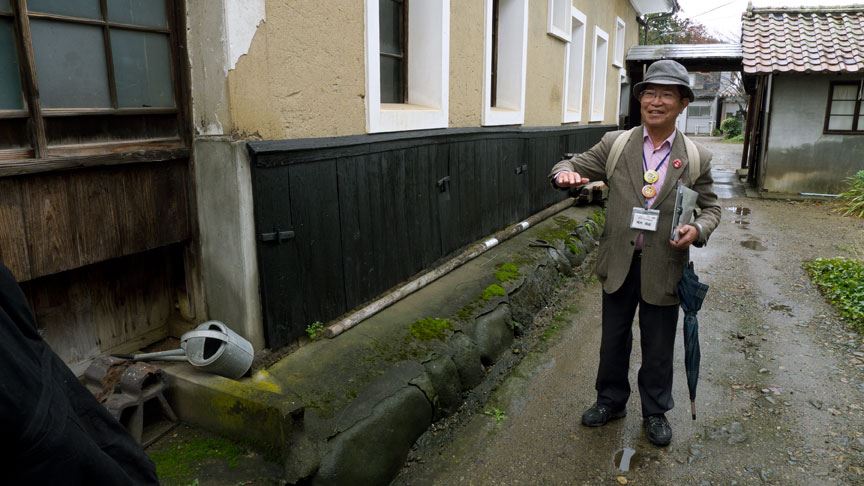 We took a nice tour of the city with a local guide and he overwhelmed us with tons of information about this 1500 year old city. Many of the buildings have double roofs for insulation. Fukushima is known for it’s roof tiles, brick, soy sauce, and of course, the local sake. So, of course, part of our tour was, yet again, another sake brewery. Geeez… Japan was beating me to death… I finished the tour in a daze after sampling all the local brews.

I would like to pause for a brief second and say one thing. Of ALL the MANY and PLETHORA things I love about Japan and it’s culture… what the hell is it with their TOILET PAPER!!!! It’s so thin you can almost see through it and you have to be careful not to get a paper cut. OK…it’s not THAT bad but GEEEEZ PEOPLE… you have complicated electronic toilets but ya can’t get the paper right!??? WTF??? OK…rant over. 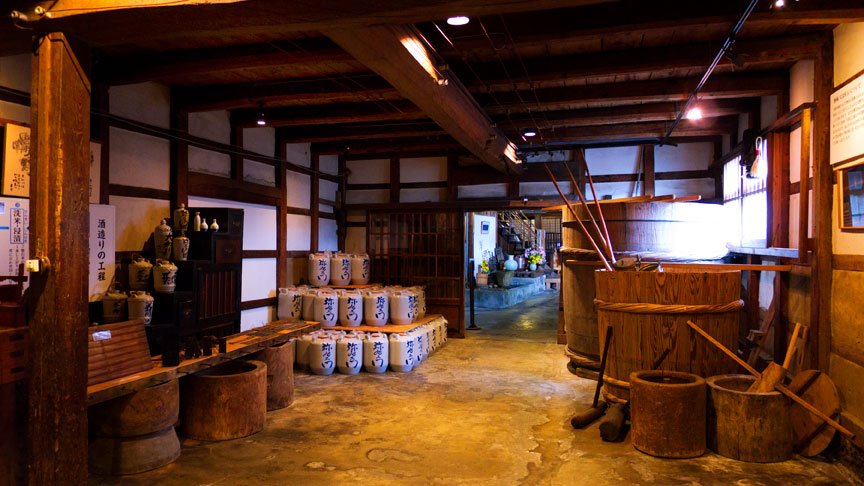 Now…I feel better…so back to my story. We were driven around the city by the owner of the local sake brewery YAMATOKAWA  (don’t ask me how my gf knew HIM – she seems to know everyone on Earth) and we stopped at a town center where a small gathering of locals were celebrating a low key version of harvest festival. They invited all five of us to have lunch with them (by this time we had been joined by my friend Jim Beaver and his guide, Kazumi) so we sat down to a HUGE spread of marvelous marvelous food. My girlfriend’s ancestors are from this area, so as we spoke with the locals, they connected the dots and several of them, it turns out, actually knew her grandmother. “She was a good Doctor” one guy said nodding approvingly. 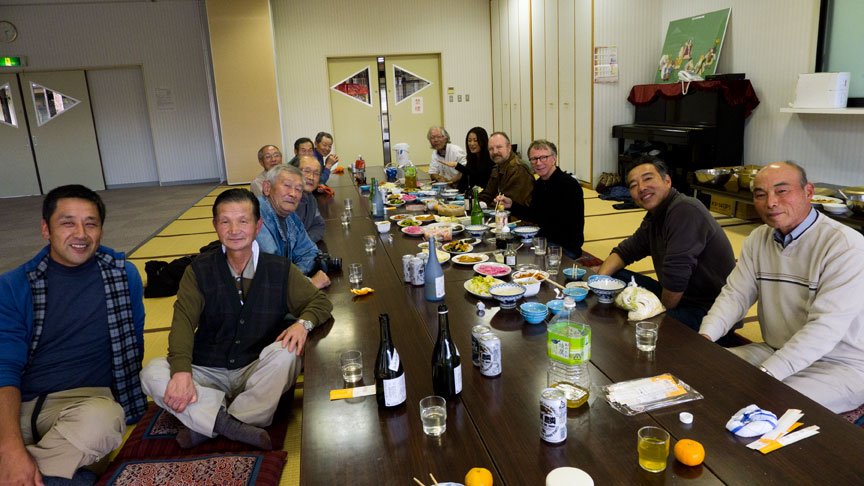 But then… “She was a drunk…. and she touched me!” said his friend.
Maybe it was the sake but I’m pretty sure that was one of the funniest things ever uttered by a human being. The timing couldn’t have been better.
In her defense, my girlfriend’s Grandma WAS a good doctor and was VERY aware that the locals often didn’t have the money to pay her. So they brought her food, housewares, and of course, SAKE! Being Japanese, she HAD to drink it so as not to offend. It also came to light that her “touching” was chest tapping done during an examination. But…even so, it was hysterically funny and delivered ever so perfectly by an eight hundred and thirty five year old wrinkled little Japanese man. Classic.
From the celebration we drove over to a property still owned by my girlfriend’s family. I had visions of fixing up the house there and turning it into a Bed and Breakfast and getting out of Los Angeles… going somewhere that I can’t actually see and taste the air. 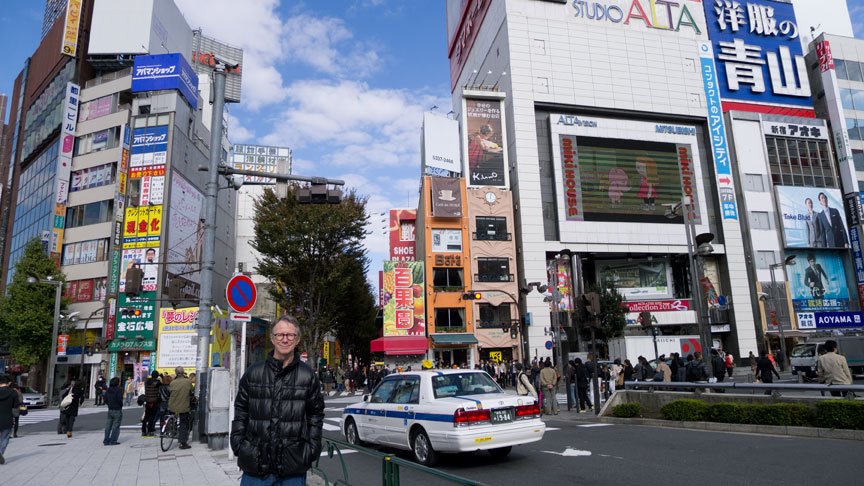 We boarded a train and headed for Tokyo, our heads spinning with 11 days of madness. More than once on this trip, I had asked where we were.
Back at the Tokyo Hilton we picked up a few bags we had stored and headed for Narita Airport. We passed, I kid you not, a hotel named “First Wood”… then “Hotel Slit”… then “Hotel Rainbow”. I guess some things just don’t translate.
My friend Jim speaks a bit of Japanese so he did his best to leave a good impression. As he was getting off the bus, he MEANT to say,”Thank you for driving us”… but he attempted to use past tense and failed. What came out was, basically, “Thank you for driving us… NOT!”
We are STILL laughing WITH him over that.

I stopped in one of the tourist trap shops to buy a pen before we boarded and was a bit undecided. My gf handed one to me and said “this one!”. I guess I must have looked at her quizzically because she snapped,”Hey, I’m Japanese, I know more about pens and toilets than you do!”
I bought the pen… and by the way…she was right.

On board the plane I watched the little monitor’s trace of our flight path over the ocean. I didn’t want to leave that beautiful charming land. I HIGHLY HIGHLY recommend EVERYONE visit Japan. It fits the bill for something John Muir once said, “Everybody needs beauty as well as bread…places to play in and pray in…”.