Little did we know what surprises THIS day had in store for us.
We decided to head out to Arashiyama and take what is LITERALLY called the “Romantic Train” for a lovely ride out through the country side and out into the boonies away from Kyoto. We arrived at the station with plenty of time to get our tickets for the Romantic Train that left from this same station an hour and a half later. We sat down to have a drink but I realized I’d left my backpack on the train!
Kaz dashed down and made some calls and inquiries and the bottom line was that she had to take another train to pick up my backpack and then try to get back before our “Romantic Train” left for the “peaceful and beautiful” ride.

Russell and Carol took a walk to a nearby temple, Squi and I visited the local miniature train set, while poor Kaz took off in a panicked dash to gather up my lost backpack, which, by the way had our passports and other stuff in it!
The miniature train set was incredible. It was about 1000 sq ft of miniature houses, trains, temples, Ferris wheels, and cityscapes. The room would even go dark and the whole set would light up in a night scene! Squi loved it.
Meanwhile, in the gift shop you could find crazy stuff like KitKat flavored sake, Romantic Train beer, and pizza flavored Pringles! 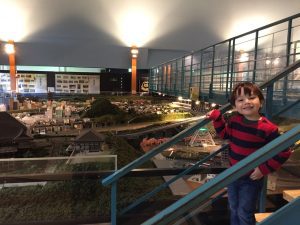 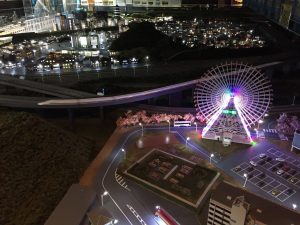 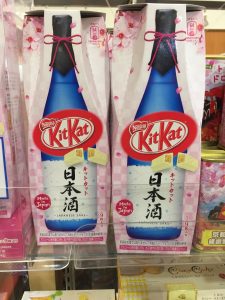 Much to all our amazement, Kaz made it back in time to make the Romantic Train and we boarded all happy and glad the ordeal was over….but it kinda wasn’t.

When we sat down, Russell said he didn’t feel well but that he thought he’d be OK till we got to our destination. He was kinda right but not totally. We had a lovely ride out through the country waving at rafters passing by below us in the river, checking out the mountains, and the occasional Cherry blossom. 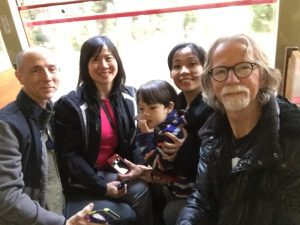 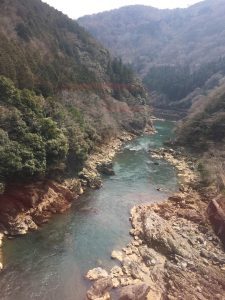 We arrived at the teeny station at the end of the line out in the country side and we got up to leave the train…well…all of us except Russell. He was right about not feeling well. He stood up to get off the train but then sat back down and totally passed out!
Kaz ran to get someone while Carol and I sat with Russell not real sure what to do, but soon he came around and we helped him get up and off the train. We got him into the train station and after a bit of a visit to the restroom, he felt better. Turns out he’d had a sandwich that gave him a good dose of food poisoning. Still not sure what had happened, we took a cab back to our hotel in Kyoto and let Russell rest for the remainder of the day. I googled his symptoms and it was classic food poisoning, so assured as we were that he was out of the woods, we abandoned him and went sightseeing some more!

We walked a LOT. The Nishiki market was full of food, clothing, and souvenirs so Squi got some yummy ice cream while we just nosed about.

In the Gion district, which is famous as the birthplace of Geiko, we had some marvelous tempura while Squi was passed out on our laps.
A side note: the original name is Geiko (not Geisha). The origins of Geiko are rooted in Kyoto and the Geiko who work in Tokyo are called Geisha. In Japan, Geiko or Geisha are rock stars. They are highly educated and trained for YEARS before they are allowed to accept clients. A popular misconception in the States is that they are more or less high paid prostitutes, but that couldn’t be further from the truth. They are highly educated, politically and artistically aware, professional company. At $1000 – $5000 for an evening, it is usually wealthy business men who have Geiko as escorts to events and dinners. Their kimono alone can cost upwards of $20,000 or more, so it is not a profession taken lightly. We were VERY fortunate to have seen one Geiko as she left the House to meet with her client. More often than not, they will be picked up in front of the House or the business man will come to the House for dinner or an evening of entertainment. Three things to be aware of if you are in Gion in search of Geiko. One is that you will see LOTS of tourist girls dressed up as Geiko, so don’t get confused. Two, you will also occasionally see Maiko who are girls in training to become Geiko. Three – there are girls who dress up and parade around getting their photos taken with/by unsuspecting tourists and charging for the photos. These are NOT Geiko and as a matter of fact, it is fairly rare to see an actual Geiko.

Another thing that I find endlessly fascinating about Japanese history and culture is the architecture. The eaves of many old temples and shrines look like a crazy kind of Lincoln Log arrangement. We checked out Temple Kodaiji to make sure the light show we enjoyed the year before was still going on.  It was.

Squi passed out … in Gion while we were eating nice Tempura dinner.

I had a conversation with an American architect that I randomly ran into while we were there. He said the structures were interlocked so as to be stable but that the way they interlocked allowed them to move during and earthquake. It was so random to run into him while I was there staring at the structures and wondering, yet again, why and how they made these incredible structures. Strangley – we BOTH had just celebrated our birthdays the day before! What are the odds!

Back at the hotel Russell was recovering and we came home tired and ready to relax before getting up and doing it all again!