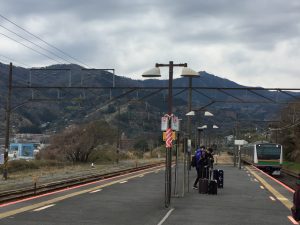 From the comfort and solitude of our getaway in ryokan Kamata, we ventured back to the big city madness of Tokyo. Tokyo is currently the biggest city in the world, and wonderfully – the SAFEST city in the world! I could literally put my camera on a bench with my wallet next to it, go in a store and shop for an hour, and when I came back it would still be there. It’s one of the MANY things about Japanese culture that I love and admire.

In Tokyo we arrived at the train station in Shinagawa then took a cab to our hotel in Asakusa. One thing about the hotels in Japan…the rooms are small….very small. But we figured we were only going to be in there for sleeping and taking a shower, so no big deal but it’s worth noting if you are planning a trip there.

Our friends, Carol and Russell came in that night to hang out with us for a week. We were so happy to see them and excited to show Russell around since it was his first time in Japan. Carol had been there before with us, so this was a special treat for her also.
First stop, of course, was a local bar to get a taste of what the Japanese do and drink after work. We went to the locally famous Kamiya Bar and had tasty bar food treats.
https://www.timeout.com/tokyo/bars-and-pubs/kamiya-bar 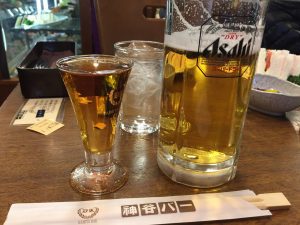 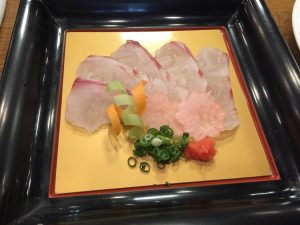 Kaz had to teach an acting class that evening, so she hopped a train and left us on our own to wander and explore. Our explorations started out with going to Akihabra, the electronics capitol of Tokyo. I forgot to bring our selfie stick from home, so it was an easy find in Akihabra.
We didn’t count on our GPS not working so well in the city. Seems the signal bounces all around in the tall buildings and makes finding each other pretty much impossible. Contrary to what Verizon said, my phone wasn’t working, so I was useless in helping find Kaz once her class was over. After a lot of false starts, we all were finally reunited and got our shopping mojo in gear.

We had a good laugh at the Asahi building and the ridiculous giant sculpture on top of the building adjacent to it. Supposedly the Asahi building is a beer glass with the foam of a beer on top and the “golden Flame” atop the other building represents the fire or flame inside the beer. It makes no sense and has come to be known as  “Kin no unko” which translates as “The golden Turd”. At least it is memorable! 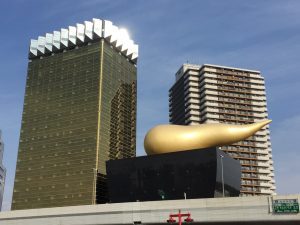 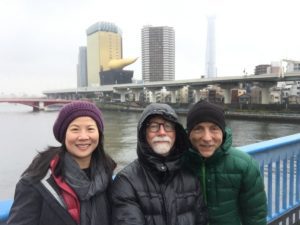 Even though it was chilly and drizzling rain, it was great to be here and with good friends.
We found a fabulous restaurant and had extraordinary miso dipping sauces and veggies. Even the veggies seem better in Japan.

We made it back to our hotel content with a good day of exploring, shopping, and eating amazing food. Carol’s famous quote of the trip was,”I wanna just eat my way through Japan!” 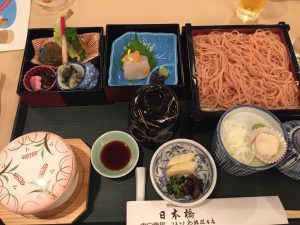