On Monday, April 29th, Michael Helms will be in Vegas to assist his good friend, Charlie Schlatter’s on-camera class, so their students will have great lookin’ footage!

Charlie is a true working actor and is a great teacher.  You will love him!

Michael will be also shooting Models’ and Actors’ Head shot in Vegas on Sunday, April 28 and Monday, April 30.

Email to book your spot!

Monday, April 29
12 to 4 PM – Audition techniques
– How to breakdown the sides
– How to ACT like a pro. Don’t REACT, take charge
– Take control of audition time
– Be aware of your habits
– Know your “types” – and stop wasting your time

5 PM to 9 PM – On-Camera interview / Acting technique
– Be aware of jargons
– Different types of on-camera auditions
– How to be energetic without being annoying
– Be aware of your body language
– Master your First Impression
+ You will get a copy of your sample auditions to
add to your reel use on YouTube. +++

“Small Class – Participants will receive critiques from the instructor directly”
Audition Technique $150.  On Camera interview class $200.  OR BOTH for $300.

Location to be announced

Instructor: Charlie Schlatter …. Since 1988, Charlie has been acting professionally in movies (ex. Bright lights, Big City as Michael J. Fox’s brother, “18, Again!”with George Burns, etc), TV (ex. Dr. Jesse Travis in “Diagnosis: Murder” with Dick Van Dyke, NBC sitcom Ferris Bueller for Ferris Bueller” etc) and numerous theatre. He is also established as voice over artist, creating roles for Ben 10, Bratz, Futurama, and Kickbotowski to name a few.
He has been helping new actors with their profession for over ten years, and has been the guest speaker at many conventions, universities and radio programs and outlines ways to eliminate wasteful steps in order to become a working actor.

Facilitator:Kaz Matamura, a theatre director in Los Angeles and a media trainer to corporate executives, athletes and public figures, has been training actors in the US and in Japan.  As an actor, she was trained by legendary teachers such as Frank Corsaro, Lynn Redgrave and Mercedes Shirley of the Stella Adler.As an artistic director, she founded the Secret Rose Theatre in North Hollywood in 1999. As a founder of the non- profit Fire Rose Productions, she produced over fifty events and festivals, established student exchange programs, and formed children’s readers theatre at local libraries and free children’s arts classes from 2000 until 2011.
She is also a recipient of Women in Theatre Red Carpet Awards, Artistic Directors Award, Fred Vogel / CTI / Drama Biz Award, Woodstock Guild Fellowship, and California Traditional Music and Dance Fellowship. Kaz has trained and coached more than three hundred clients since 2000. 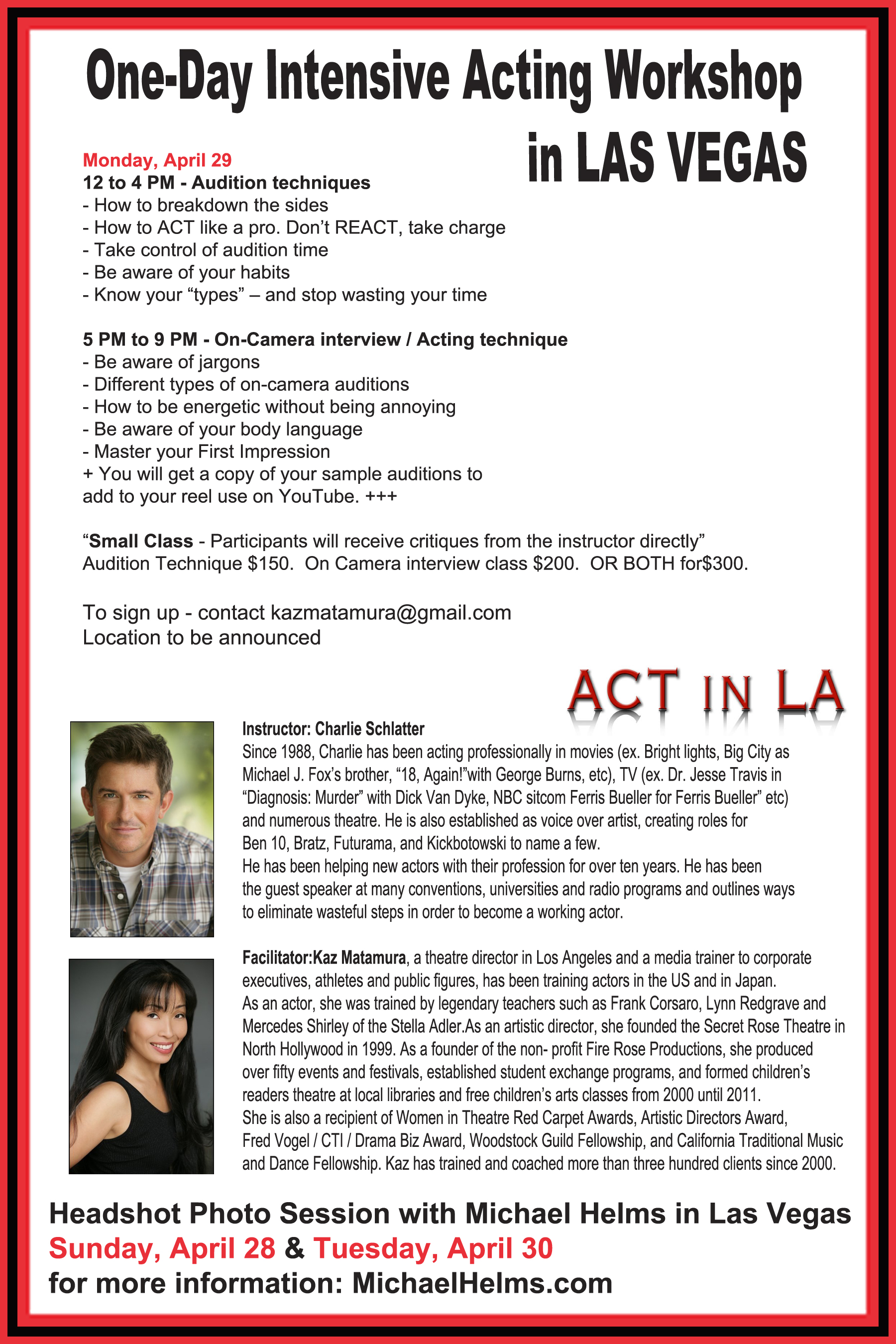 Tweet
About Michael Helms
Michael Helms has been a successful photographer in Los Angeles for 35 years. He has photographed some of Hollywood's most notable celebrities, including Kate Hudson, Tim Curry and Angelina Jolie. From shooting documentaries on the orphanage of Katmandu, Nepal to photographing the cannibals of Papua, New Guinea, to hang gliding in the high Sierra, and even to the depths of the ocean taking photos of sea life in Bonaire. Michael's work and range of experience are extensive.
Recent Posts